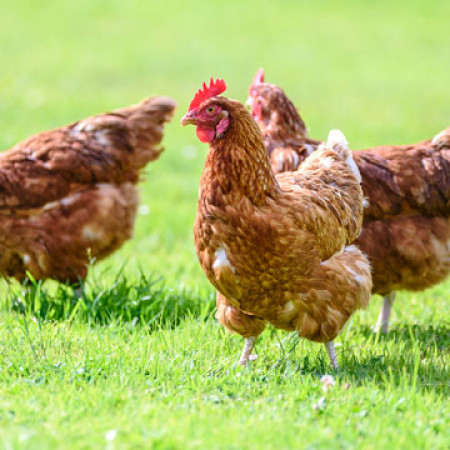 What is avian influenza?

The professional team of Groward group is highly focused on the avian influenza situation in the world. This concern leads to more restrictions preventing the virus infection: feed and water controlling system, so there would be no contamination risk, keeping a spotless environment, birds are isolated from the possibilities to contact wild birds or animals, regular disinfection of the farm and observation of the flock.

A more familiar name is bird flu, a highly contagious virus dangerous for chickens, ducks, geese, turkeys, and eagles. Which is expanding via saliva, fecal droppings, and nasal secretions; this makes it hard to control. The most contagious variations of avian influenza are H5 and H7.

The most common symptoms of the virus are a sudden increase in mortality of flock, decreased level of egg production, and consumption of water and feed.

Watching what is happening in the world, it was noticed that bird flu is not a seasonal virus anymore as we thought before. The virus appeared mainly in countries with many water bodies, such as the Netherlands, not so long ago. Usually, it happens during the migration season, so in the last months of the year. However, the virus also appears in drier areas and is present yearly.

Risk for a human being

Avian influenza has a low risk for humans, it is possible to get it, but these cases are pretty rare. Those rare cases usually appear among people working on bird farms.

Is it safe to eat poultry and eggs?

It is noticed that properly prepared, and cooked poultry and eggs should not pose a risk to consumers. The chance of infected poultry entering the food chain is meager, Food Safety Authorities are responsible for inspecting all poultry sold in interstate and foreign commerce.

In 2022 bird flu was registered in 29 states of the United States. According to the agency, the combined number of birds in the infected flocks totaled more than 33 million. U.S.D.A. confirmed that those birds need to be euthanized to prevent the spread of the virus.

France is facing its worst bird flu crisis in history as a rare rebound in outbreaks reached its largest poultry-producing regions, infecting more than 12 million birds. The spread of bird flu has raised concern among governments and the poultry industry due to the ravages it can cause to flocks, potential trade restrictions, and the risk of human transmission.

The virus, brought by wild birds migrating in the autumn, hit all countries in the 27-member European Union except Malta and Cyprus, with Italy suffering the most severe damage.

Taking a deeper look at the Asian region: China, Japan, the Philippines, the Republic of Korea, and Vietnam have also faced an outbreak of bird flu.

Large pharmaceutical companies are working on a vaccine against the virus. On the other hand, not all countries want to introduce a vaccine strategy. In addition, there are concerns about the safety of meat and eggs from vaccinated animals. But now that the virus is spreading so fast, more and more countries are also seeing the need. So soon, there will be trials with vaccines in the Netherlands, Belgium, and France, among others.

Our request form uses Google Recaptcha which helps us distinguish you from online robots sending us spam messages.

You can select which cookies are to be accepted.